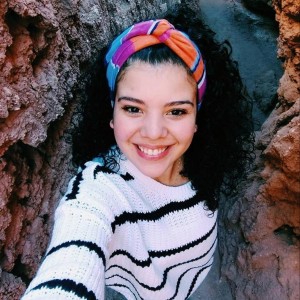 “Eye to Eye” by Huapeng Zhao (China). Photographer of the Year, Second Place. “I met this boy while walking at the seaside. When I was trying to take a picture of him, he put the fish he caught in front of his eye.” Shot on iPhone 6.

“Displaced” by Jashim Salam (Bangladesh). Photographer of the Year Grand Prize. “Rohingya children watching an awareness film about health and sanitation near Tangkhali refugee camp in Ukhiya.” Shot on iPhone 7.

“Baiana in yellow and blue” by Alexandre Weber (Switzerland). Photographer of the Year, First Place. “The picture was taken in Salvador de Bahia, Brazil, spontaneously, after a truck drove by. The woman with traditional clothes of a ‘baiana’, was looking after the truck, during her work break.” Shot on iPhone 6S

‘Django’ Old man baby dog” by Robin Robertis (United States). First Place – Animals. “Django is a Shaolin Temple Terrier, born
and raised in a Buddhist monastery in the northern province of Hunan China. Django likes long walks on the beach and listening to Miles Davis.” Shot on iPhone 7 Plus

“Iftar Amongst the Ruins” by Mohammed Badra (Syria). First Place – News & Events. “During a lull in the bombings, Syrians gather, seated on a long 1200-meter row of tables set up amongst the ruins of Douma, for a public Iftar, the evening meal at the end of the daily Ramadan fast.” Shot on iPhone 7.

“Human vs. Nature” by Charles Thomas (United States). First Place – Landscape. “I’ve always been fascinated with the view out of an airplane window. On this afternoon, I was lucky enough to get a window seat on a return trip from Las Vegas. I watched the landscape slowly transform from cityscape to rows of identical suburban houses, to surreal desert-scape.” Shot on iPhone 8 Plus

“Spray Fury” by Melisa Barrilli (Canada). First Place – Children. “My daughter was wearing her ballet leotard and she was spraying her siblings and herself.” Shot on iPhone 5S

“Icebergs” by Mateusz Piesiak (Poland). First Place – Panorama. “In summer the sun is above the horizon nearly all day where Vatnajökull glacier meets the Atlantic Ocean.” Shot on iPhone 6 Plus.

“Dandelion sunset” by Sara Ronkainen (Finland). First Place – Sunset. “In central Finland, where summer days are long and sunsets beautiful. I was out walking by a lake one evening, and saw dandelions floating in the breeze. Feeling inspired, I picked one, held it up and used it as a filter through which to capture the last rays of the day’s sun.” Shot on iPhone 5s.

“Silk Road” by Anna Aiko (Japan/France). First Place – Travel. “This photo was taken on the first day of my departure for the desert of Gobi, on
the Silk Road. On the road I got lost with my two Mongolian men, driver and guide, and we found ourselves in this area known for the very first traces of dinosaurs. The atmosphere was magical, in the vast desert with plains and mountains.” Shot on iPhone 6S.

“Road of Tuscany” by Lidia Muntean (Romania). First Place – Trees. “This photo was taken near Pienza and Montalcino.” Shot on iPhone 7 Plus.